We will depart from the bus station of Benidorm that takes us on a direct trip to Valencia, very close to the Valencia bus station we will pick up the bike to start the tour of Valencia.

The tour starts at the Turia Gardens (former riverbed crossing the city) where the guide will explain why the gardens were set in such a unique place.

You enter the historic centre through the Serranos Towers, the main doorway into the medieval city -when it was walled-, and from there we take you to the Plaza de la Virgen – the heart of the historical center- to see the exterior of the basilica and the cathedral.

From there, we go to the neighbouring Palacio del Marques de Dos Aguas, one of the most important examples of baroque architecture in Spain. And passing by the old university, we get to the Glorieta gardens, where you can see some magnificent and monumental ficus trees. 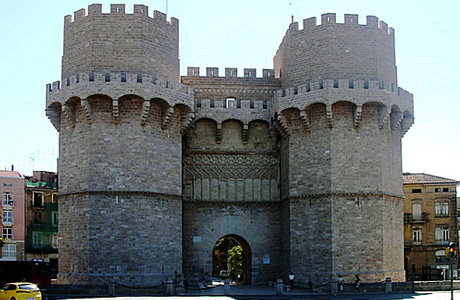 We then go back to the Turia Gardens to reach the most spectacular and symbolic part of new Valencia, The City of Arts and Sciences, where the guide will describe and explain the history behind buildings such as the Palau de les Arts (Opera House), the Hemispheric, the Science Museum, the Umbracle, Agora, Oceanographic and also the bridges, which encompass the greatest concentration in the world of works designed by the architect Santiago Calatrava.

And from there, we cross the Turia Gardens, passing under modern and historic bridges until we reach our point of departure.

Later we will have the bicycle the rest of the afternoon to continue visiting the city or to do shoping, until the time of return where the bus will take us back to Benidorm.