Altea is the cultural capital of the Valencia region. The old city center is situated on a hill where the picturesque church with its typical blue domes rises high above the bright white houses. The “Nuestra Señora del Consuelo” is also called the city’s calling card. 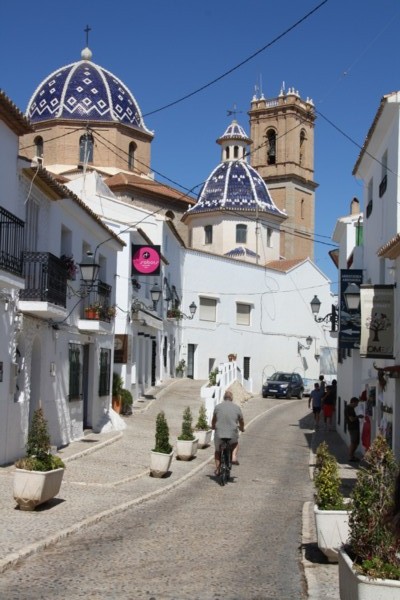 Over the years, Altea has expanded over a vast area. Besides the city of Altea with its old town center, the villages Altea La Vella, Pueblo Mascarat and Altea Hills are also part of the municipality. Nearby you will find the popular coastal towns of Albir and Calpe. The latter is best known for a large rock in the sea, the “Penyal d’Ifac”, the fishing port with fish market and the many fish restaurants. Fantastic beaches a plenty. Did you have enough of all the sand between your toes? Walk or bike from the beach to the center on top of the hill. The narrow winding and rolling streets in the old town center all offer a beautiful view of the city and the Mediterranean. The “Sierra de Bernia”, the vast mountain region north of Altea, offers various possibilities of walking and cycling. Altea is best known as an artists’  village, so that is why there are so many galleries and arts and crafts shops. Perhaps you will find a suitable souvenir here to take home!